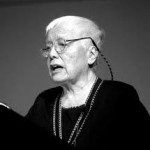 Grace Lee Boggs (b. 1915) is an activist, writer, and speaker whose seven decades of political involvement encompass the major U.S. social movements of the past hundred years. A daughter of Chinese immigrants, Boggs received her B.A. from Barnard College (1935) and her Ph.D. in Philosophy from Bryn Mawr College (1940). She developed a twenty-year political relationship with the black Marxist, C.L.R. James, followed by extensive Civil Rights and Black Power Movement activism in Detroit in partnership with husband and black autoworker, James Boggs (1919-93).

Grace Lee Boggs’s published writings include Revolution and Evolution in the Twentieth Century (with James Boggs, Monthly Review Press, 1974; reissued with new introduction by Grace Lee Boggs, 2008); Conversations in Maine: Exploring Our Nation’s Future (with James Boggs, Freddy Paine, and Lyman Paine; South End Press, 1978); and Living for Change: An Autobiography (University of Minnesota, 1998). Her writings and interviews with her have also been widely disseminated through newspapers, magazines, websites, and academic journals.

At the age of 95, Grace remains much in demand as a public speaker and exceptionally active as a community activist and weekly columnist for the Michigan Citizen. Her many honors include honorary doctorates from the University of Michigan, Wooster College, Kalamazoo College, and Wayne State University; lifetime achievement awards from the Detroit City Council, Organization of Chinese Americans, Anti-Defamation League (Michigan), Michigan Coalition for Human Rights, Museum of Chinese in the Americas, and Association for Asian American Studies; Detroit News Michiganian of the Year;  and a place in both the National Women’s Hall of Fame and Michigan Women’s Hall of Fame.

This entry was posted in Speakers. Bookmark the permalink.